Dissecting Serbia: Why the nation’s IT and Outsourcing is so important, and so good

By Polina Tibets, Head of Tech Due Diligence at Digital Knights

“At Digital Knights we evaluate countless software development companies and tech teams across Europe. Something about Serbia keeps sticking out.”

Highly qualified experts and long-term cooperations with Western and Arabic companies have made the information technology industry one of the most important drivers of the Serbian economy today. Already, leading digital companies have either established development centers in Serbia or have outsourced services to local firms. Those of us at Digital Knights are no strangers to highly talented teams and individuals from Serbia, but several less obvious factors help the nation stand out as a whole in the IT world.

In 2017, The Serbian Information and Communication Technologies (ICT) sector exported 750 million EUR, ranking the country as one of the 50 biggest software exporters globally. With a year-to-year growth rate eclipsing 25%, ICT is among the fastest growing sectors in the country and since Serbia is not a member of the EU, most home-grown talent stays in place. On top of this, Serbian people are exceptional when it comes to English language proficiency, ranking third worldwide (behind the Philippines and Norway) and have been in the Top 5 globally for more than five years.

With such talented remote teams, Serbia is fast becoming one of the most in-demand outsourcing destinations in Central and Eastern Europe. The country’s engineering education is particularly strong, with almost a third of university graduates coming from technical schools. ICT is currently being taught at 37 higher education institutions, while demand for placement in these programs is ever increasing. Locally, salaries in software development services are increasing as well, however Serbian companies and professionals are extremely competitive with other established “outsourcing” destinations. According to the leading ICT portal in Serbia, STARTIT, there are:

Locally, entrepreneurs have risen to the challenge by establishing more than 100 software houses that work with 50+ different countries around the globe, host innovation hubs, self-fund startups, and support business partners. As the system further develops, more and more Serbian software companies may naturally appear in response to the rising demand. 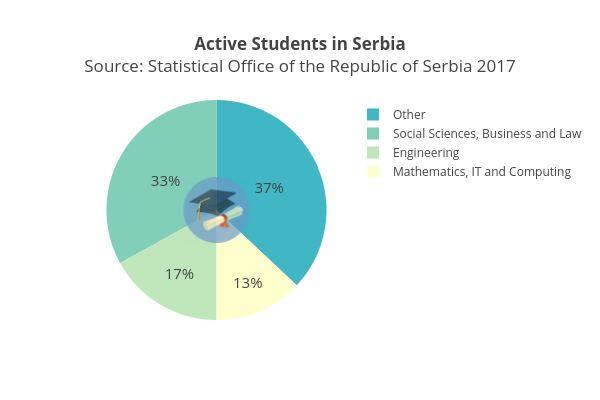 Value for your project

The Balkans is one of the lowest cost regions in Europe in terms of software development services, especially compared to the Nordics. The sheer cost of living adjustment coupled with the competitive scarcity in places like San Francisco means choosing Serbia as a destination for developmental activities just makes economic sense. Skillful programmers with a Western European flair, high levels of deep technical knowledge, and impeccable English, combined with lower than average rates makes this a difficult destination to ignore.

Committing to the development of the economy, the Serbian government is focusing on stability and a predictable environment for investment and business operations, as well as accelerating growth and creating new jobs. Key players such as Google, Microsoft, SAP, and many others have taken advantage by establishing development centers in Serbia or outsourcing services to local software development firms.

Government support of the IT sector

The Serbian government has dedicated itself to encouraging growth in the sector and established a Ministerial Council for IT, Innovation and Entrepreneurship, with the mission to address any issues, support the industry, and enable faster development. The great demand for IT professionals globally and in Serbia especially has resulted in increased investment for expanding computer science programs at universities and improving the curriculum for IT in primary and secondary schools, ensuring a steady pipeline of talent. The IT Council is set to invest around 8.5 million EUR into the infrastructure and around 1.5 million EUR into retraining programs. The government’s plan during the next few years is expected to:

• Reach 1.5 billion EUR in IT sector net exports.
• Increase the number of skilled IT workers to 5,000 per year (from current 1,500) through educational initiatives.
• Invest more in the physical infrastructure of the IT centers in Serbia, mainly within universities.
• Reduce barriers of entry by changing the legal framework related to early stage investments, electronic payments and venture capital, introduce tax reliefs for business angels, and review IT industry grants.

Behind the scenes, Serbia is borrowing good ideas from outside the country as well. The Ministry of Public Administration is using the Finnish cultural model as a template for building an efficient tech ecosystem. The Embassy of Finland in Belgrade (together with the Serbian Innovation Fund) organizes local pitching competitions with the winner having a chance to participate in a 10-day long boot camp in Helsinki and attend conferences.

Cultural affinity – Serbia has a delicate balance and link between East and West, both on a personal and business level, which makes building relationships easier.
Time Zone – Serbia is situated in the same time zone as Western Europe (+/- an hour), which enables easy coordination of daily communication and meetings arranged during working hours. Time zone difference from East Coast is six hours, which makes overlap with clients possible at least for a portion of their working hours.
English language – The English language is mandatory through education in duration of at least eight years, and since they study at least 2 foreign languages, it is common to find professionals from all lines of work with excellent knowledge of German, Italian, Spanish, French or Russian.
Value – Clients can get relatively low prices in Serbia for the same high quality of work as in Western Europe or USA.
Education – Thanks to the educational system significantly focused on engineering and computer sciences, Serbia creates highly qualified and very capable young people with strong mathematical and logical background focus.

Several Digital Knights members visited Serbia in January to meet with tech teams and dev houses interested in joining (or already in) the Digital Knights network of approved partners. For more about the trip to Novi Sad and Belgrade, see what Domilé had to say.